This is the ultimate vegan sweet potato soup! It's rich and creamy, with aromas of curry and cinnamon. The soup gets topped with garlicky kale, sweet apples and crunchy peanuts for an incredible one-bowl meal that I hope you'll love.

You know how grain bowls are all the rage? Well, in the dead of winter, you need a soup bowl. What’s a soup bowl, you ask? Good question, since I just made it up. Basically, you take the same concept of a grain bowl, which layers grains with different flavors and textures (and which you can read all about in my book, Build-a-Bowl), but here the base is a thick and creamy (but vegan) sweet potato soup. It gets topped with a mound of rice, frizzled kale, tart green apples and crunchy peanuts. The soup is delicious on its own (that's how my kids prefer it), but it’s made even better by the toppings!

Whenever I have leftover soup for lunch, I almost always slide in cooked grains, greens, and/or a handful of salad (which I usually make to serve on the side, but inevitably end up dumping in the soup). The greens brighten up the soup, and the grains add substance. I always felt like this was some strange food fetish (like how I like to eat with my hands when nobody is watching), but then I realized that liquids have been joyfully mingling with grains and greens for centuries (think Thai curries over rice, Italian stews with farro, Vietnamese pho with rice noodles and fresh herbs…). Duh!

The soup base is so simple, but filled with flavor. Sweet potatoes and green apple create a sweet and silky soup with undertones of ginger and curry (if you’re not into curry powder, the soup is still delicious without it). The sweetness of the soup is counterbalanced by a tangle of garlicky, slightly caramelized kale, and a big spoonful of rice (quinoa would also be great). A sprinkle of peanuts (or pecans or pepitas) and minced green apple lend a salty-sweet-tart crunch. It’s pretty much my lunchtime—or anytime—nirvana. Just don’t judge if you see me eating bits of kale off my soup with my hands. Or hell, give it a try. People have been doing it for centuries.

How long will the soup keep?

The soup gets even better with time and can be refrigerated for up to 5 days or frozen for up to 3 months!

Substitutions you can make to this recipe

Make it a grain bowl!

This is an addendum. Yesterday I went to warm up a bowl of soup for lunch, but realized that my two-year-old had stolen most of it for her lunch (damn kids). Instead, I flipped the soup bowl on its head and started with a base of quinoa, followed by the frizzled kale, then a drizzle of the soup as a sauce over top, along with toasted peanuts. Heavens to Betsy!  The soup is also a killer sauce for grain bowls!

Other soups to try: 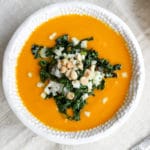 This silky and thick vegan sweet potato and apple soup gets topped with rice, garlicky frizzled kale, chopped roasted nuts and tart green apple. The soup is delicious on its own, but made even better by the toppings. The recipe calls for cooked rice or quinoa, which you’ll want to start at same time as the soup, so that it’s ready for you (it’s also a great way to use up leftovers). Look for a light vegetable broth (or you can use chicken broth if you're not vegetarian), as dark broths can overpower the other flavors (you can also use all water!).
Prep Time20 mins
Cook Time20 mins
Total Time40 mins
Course: Soup
Cuisine: American
Keyword: curried sweet potato soup, easy vegan soup recipe, healthy sweet potato soup recipe, vegan sweet potato soup
Servings: 4 people
Author: Nicki Sizemore

Do Ahead: The soup (without the toppings) can be refrigerated for up to 5 days or frozen for up to 3 months.  Tips: