This savory spinach tart is one of my favorite make-ahead meals or appetizers. It features a buttery, flaky crust (which can be made gluten free!) and a sweet and savory spanakopita-inspired filling. Even my kids go nuts for this spinach pie (which says a lot, since they usually avoid anything green). Best of all, the tart is way easier to make than you might think. (Don’t miss the step-by-step VIDEO below.)

As you may know, pie is one of my very favorite foods (you read all about that in this pie crust post), and this savory pie is no exception. Fresh ricotta lends creaminess, feta gives the tart a salty kick, dried currants (or raisins) lend a touch of sweetness and a dash of cinnamon provides warmth. It’s the ultimate combination of flavors.

Instead of fussing with a tart pan, this is a free-form spinach galette. It’s easier to make than a classic tart (and more beautiful in my opinion!). It’s made with frozen spinach and only needs 30 minutes in the oven.

The foolproof pie crust is made with either Gluten Free Cup4Cup Flour or regular all-purpose flour (meaning you can make a gluten free spinach pie, and nobody will have a clue). You’ll need to make the pie dough before beginning the tart (you can make it several weeks ahead).

How to make a spinach ricotta pie:

Can you make the spinach tart ahead?

Yes! The spinach tart can be made up to 6 hours ahead. You can serve it at room temperature or reheat it in the oven.

What do you eat with spinach pie?

Serve the spinach pie with a big green salad for a lovely main course or brunch. If you’re serving it as an appetizer, cut it into thin wedges and serve it on its own.

How should I store leftover tart?

Store the leftover tart in the refrigerator (wrap it in plastic wrap or transfer it to an airtight container). The tart is delicious cold, or you can reheat it in the oven or in a toaster oven.

Tips for making this spinach tart:

Other galettes to try: 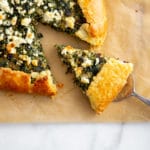 This spanakopita inspired spinach tart is easy to make and has an incredible flavor from a few secret ingredients. Dried currants (or you can use coarsely chopped raisins) and cinnamon provide a touch of sweetness and warmth, complementing the savory flavors. Serve the galette as a main course, appetizer OR brunch. You’ll need to make a batch of this Easy Pie Crust Dough (which can be made gluten free!) before beginning the tart. The dough can be made days or weeks in advance. You'll only need a half batch of the dough but it's best to make the whole recipe and freeze the other half for another galette down the line or for a sweet galette (see the Notes below). For more garlic flavor, you can mince the garlic cloves and leave them in the filling. To see how the tart gets assembled, check out the step-by-step video above!
Prep Time30 mins
Cook Time30 mins
Total Time1 hr
Course: Main Course
Cuisine: American
Keyword: savory galette recipe, spinach and ricotta tart, spinach tart
Servings: 1 9-inch tart
Author: Nicki Sizemore

Roll out the crust