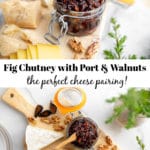 This fig chutney recipe has been a staple in my kitchen for over a decade. It has an incredible flavor from dried figs, ruby port, cinnamon, star anise, orange peel and walnuts. It smells like Christmas, and while I make it year-round, I especially love it during the holidays. It’s an easy appetizer when served with cheese and a fabulous accompaniment to roasted pork, turkey and sandwiches (and even breakfast!). [Step-by-step VIDEO below.]

While I love entertaining, when it comes to menu planning, I’ve learned (the hard way!) that the best meals are those that can be prepped almost entirely ahead of time, freeing me up to hang with my guests. This fig chutney recipe is one of my go-to’s, as it’s an easy way to elevate cocktail hour. You can make it weeks ahead of time, and come the night of the party simply put it in a pretty jar or bowl and serve it aside a good wedge of cheese or two. Voila! Appetizers are served.

How to make this fig chutney recipe:

This fig chutney instantly elevates a cheese board, making for an elegant appetizer. For an easy crostini, spoon the chutney over fresh ricotta or brie on toasted baguette slices. It also pairs beautifully with roasted port or turkey (as well as with pork or turkey burgers!). I absolutely love it on sandwiches, especially with brie or Comté and spicy arugula. SWOON.

For a French-inspired breakfast, serve the chutney with a spread of mild cheeses, maple pecans, thick yogurt, fresh bread and fruit. Très sophisticated.

Finally, I love giving the chutney as an easy but thoughtful hostess or holiday gift. Pack it into pretty jars (I love these) and give it on its own, or pair it with a nice piece of cheese, a cheese board and a cheese knife.

How long can you store fig chutney?

The chutney will keep in the refrigerator for up to three weeks. I prefer to bring it to room temperature before serving, but it’s also tasty straight out of the fridge.

What cheeses pair with fig chutney?

Other appetizers to try: 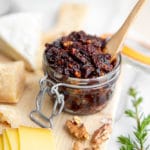 This easy fig and walnut chutney is fragrant with port, cinnamon, star anise, orange zest and maple syrup. It smells just like the holidays, and it’s the perfect addition to cheese platters or cheese plates. For an easy crostini, spoon the chutney over fresh ricotta or brie on toasted baguette slices. It’s also excellent with roasted turkey or pork (as well as on turkey and pork burgers!), and it makes a killer sandwich with cheese (think gruyere, Comté, brie or Taleggio) and arugula. You’ll need cheesecloth and butcher’s twine to bundle the whole spices but if you don’t have one you could use a tea steeper or just add the spices and fish them out at the end.
Prep Time10 mins
Cook Time20 mins
Total Time30 mins
Course: Appetizer
Cuisine: American
Keyword: fig chutney for cheese, fig chutney recipe, fig jam recipe
Servings: 1 ½ cups
Author: Nicki Sizemore

Do Ahead: The chutney can be refrigerated for up to 3 weeks. Bring to room temperature before serving. Tips: