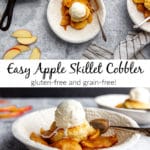 Thank you to Domino® Sugar for partnering with me on this post! I was compensated for this post, but all opinions and recipes are mine alone.

I am head-over-heels in love with this apple skillet cobbler. I ate two servings the first time I made it and would have gone back for more if my kids hadn’t found me huddled over the pan (doh! caught red handed!). Sliced apples get cooked in a cast iron skillet with butter, sugar, cinnamon and cardamom until soft and jammy, then are topped with a super simple almond biscuit topping. The topping has a marzipan-like flavor and super tender texture. It’s the perfect marriage. Topped with a scoop of vanilla ice cream, and this apple skillet cobbler is hands-down one of my favorite fall desserts. I hope you’ll love it too!

I'm so happy to have partnered with Domino® Golden Sugar on this post, which is a cane sugar that's a less processed alternative to traditional white sugar. I use it in all my baked goods (it's a 1-to-1 swap for traditional white sugar). I love its flavor, which has a distinct hint of molasses. If you can't find Domino® Golden Sugar in a store near you, there is always Amazon!

This cobbler gets assembled, baked and served right in a cast iron skillet! The apples are first sautéed in the skillet, giving them a jumpstart. That means that this cobbler bakes in far less time than most cobbler recipes, needing less than 20 minutes in the oven. Also, sautéing the apples also helps to caramelize the sugars, creating a delicious sticky sauce.

Instead of using a traditional biscuit dough for this cobbler, I top it with grain-free almond shortcakes. They’re made from almond flour, baking powder, eggs, sugar, almond extract and butter. Best of all, they’re WAY easier to make than traditional biscuits! The wet ingredients are simply stirred into the dry ingredients—no cutting of butter or folding of dough required. Plus, instead of having to roll and cut the dough, it’s simply scooped out of the bowl and onto the cobbler using an ice cream scoop.

You’ll want to use a crisp apple variety in this cobbler, such as Fuji, Honeycrisp or Granny Smith, which will retain its shape and won't turn mushy. Peel the apples and cut them into ¼-inch slices. A touch of cinnamon and cardamom lend the cobbler a warm, sweet aroma that will make your house smell like pure happiness.

How do you make a skillet cobbler

Serve the cobbler warm with ice cream, if you wish! 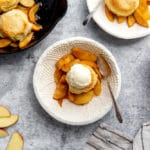 Make the filling and assemble

Do Ahead: The cobbler can be baked up to 4 hours in advance (let it sit, uncovered, at room temperature). Reheat it gently on the stovetop until the apples are warmed through. Refrigerate any leftovers (p.s. the leftover cobbler makes for an awesome breakfast with plain yogurt!). Tips:

*This post contains Amazon and other affiliate links to products I use and love (from which I earn income, at no cost to you). Thank you for supporting From Scratch Fast!

Get the exclusive content you crave straight to your inbox.

Join now to receive my latest recipes and receive a free copy of my ebook, 15 Easy Weekday Meals!