This gluten-free apple crisp tastes like a warm, delicious hug. With a crunchy topping and a spiced apple filling, it’s the perfect finale to any meal. The healthy apple crisp is naturally sweetened and lighter than other crisp recipes, but I promise you'd never know it!

I love a good crisp. It’s a humble dessert—all brown and bumpy and crunchy—but it's as uplifting as a soft sheep’s-wool sweater, especially with a dollop of ice cream on top. This healthy gluten-free apple crisp is my go-to recipe. It's as welcome on a Tuesday as it is at a weekend dinner with friends.

How to make a gluten free apple crisp:

For a dairy-free, vegan apple crisp, swap out the butter for coconut oil. Serve it with with dairy free ice cream or coconut whipped cream.

Serve the crisp on its own, with a scoop of vanilla ice cream, with a dollop of whipped cream, or with Cardamom Whipped Cream (swoon!). It's the perfect (not-too-rich treat) to finish off a celebratory meal or to cap off a regular old Tuesday.

Why is my apple crisp not getting crispy?

If your apple crisp isn't getting crispy it simply needs longer in the oven. Be sure uncover the crisp and increase the oven temperature to 400˚F (200˚C). Let the crisp cook until the topping is golden brown.

Can I make the apple crisp ahead?

Yes! The crisp can sit at room temperature for up to 8 hours, or it can be refrigerated for up to 4 days. Reheat the crisp in a 350˚F (175˚C) oven until warmed though (or eat it straight out of the fridge!).

What can you substitute cinnamon for in apple crisp?

If you don't like cinnamon, simply omit it in this recipe. The cardamom, nutmeg and vanilla will provide plenty of flavor.

What is the best apple for a crisp?

Any sweet-tart apple variety will work well, such as Granny Smith, Pink Lady, Honeycrisp or Fuji.

What can I substitute butter for in apple crisp?

Coconut oil is a fantastic swap for butter in this apple crisp, but you can also use olive oil or a neutral vegetable oil.

What is better, an apple pie or apple crisp?

How can one ever decide! Apple crisp is an easier dessert, but an apple galette is always a show-stopper.

Other fall desserts to try: 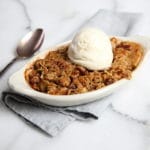 This gluten-free apple crisp is as welcome on a weeknight as it is at a dinner party! Whole and ground oats are used in place of white flour, and are combined with pecans, maple sugar and spices for a tantalizing topping that would be delicious draped over nearly anything (think berries in the spring, peaches in the summer…). It also has nearly half the sugar and butter of regular crisp recipes, but I promise you won’t miss them! A hint of cardamom and vanilla paste lend aromatic sweet warmth, but are optional. For a vegan version of the crisp, swap out the butter for coconut oil and serve the crisp with a dairy-free coconut ice cream. You can either bake the crisp in an 8x8-inch (or similar-sized) baking dish, or in smaller individual baking dishes. While the crisp takes slightly longer than an hour to make because of the baking time, the prep process is really easy!
Prep Time30 mins
Cook Time50 mins
Total Time1 hr 20 mins
Course: Dessert
Cuisine: American
Keyword: gluten free apple crisp, gluten free crisp recipe, gluten free thanksgiving dessert
Servings: 6 people
Author: Nicki Sizemore

Do Ahead: The crisp can be refrigerated for up to 4 days. Reheat it in a warm oven, if desired. (I think it totally counts as a balanced breakfast!) Tips: