Mashed potatoes are one of the simplest of side dishes but much can go wrong, leaving you with a gummy, lumpy or heavy texture. However, this foolproof pomme puree recipe results in ultra silky and light mashed potatoes every single time. With the easy technique, you'll get light, lump-free, creamy mashed potatoes without the need for any heavy cream!

What is the difference between potato puree and mashed potato?

Pomme puree is the French term for mashed potatoes, but pommes puree is typically lighter and silkier than mashed potatoes (which are usually thicker and denser). However, the terms can be used interchangeably. This puree has a rich, pure potato flavor that’s enhanced by (rather than suppressed by) butter and milk.

How do you make mashed potatoes without lumps?

The secret to making creamy and light mashed potatoes is a potato ricer. You might be thinking, “not another tool for my kitchen!” but trust me here. I’m as anti-gadget as they come, but a potato ricer is a revered tool in my kitchen. It breaks down cooked potatoes into little rice-sized squiggles, which, once stirred, turn instantly smooth without the need for pounds of butter or cream. It’s cheap, it doesn’t take up much space, and, if you like playing with playdough (come on, I know you do!), you’re going to have a blast with this tool.

How to make this pomme puree recipe:

This pomme puree has a rich, buttery flavor that pairs perfectly with just about anything. Serve it alongside roasted meats or vegetables, under stews and braises, or slather it over a shepherd's pie. The recipe is featured in my book, Fresh Flavors for the Slow Cooker, where it's served with an Asian inspired pot roast. It's one of my favorite meals ever.

What does pomme puree mean?

Pomme puree is a French term that means mashed potatoes.

Can you make this pomme puree recipe ahead?

Yes! Scrape the puree into a heatproof bowl, drizzle some milk over top, and cover the bowl with plastic wrap. Set the bowl over a pot of barely simmering water (the bottom of the bowl shouldn’t touch the water), and let it sit while you go about your business or finish up the rest of the meal. Have no fear, the best part of dinner is already done.

What type of potato is best for puree?

For the best flavor and texture, go for Yukon Gold potatoes. They have medium moisture with a golden, buttery-tasting flesh. Russets have low moisture and high starch with a dry texture that requires a ton of butter and milk or cream to turn smooth, whereas red potatoes have high moisture with less starch so tend to get gummy.

Should I soak my potatoes before making mashed potatoes?

There's no need to soak potatoes before boiling them for mashed potatoes. However, if you wish to peel them ahead of time, store the peeled, chopped potatoes in a bowl of water in the refrigerator for up to 1 day before cooking (storing the potatoes in water will prevent them from browning).

Other holiday recipes to try: 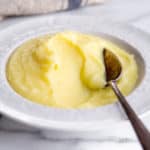 This pomme puree is ultra silky and light, with a rich flavor that doesn't require any heavy cream. It's truly the best homemade mashed potatoes recipe! The trick is to use a potato ricer to achieve a super smooth texture. Also, use Yukon Gold potatoes, which have medium moisture with a buttery flavor. Cooking the potatoes with two cloves of garlic gives them a subtle garlic flavor, but it's optional. You can also fold in other flavors at the end, such as parmesan cheese, bacon, sour cream, or chives (see the Notes below). The recipe feeds 4-6 people, but you can double it if you're feeding a crowd.
Prep Time15 mins
Cook Time25 mins
Total Time40 mins
Course: Side Dish
Cuisine: American
Keyword: best mashed potatoes recipe, creamy mashed potatoes, homemade mashed potatoes
Servings: 4 -6 people
Author: Nicki Sizemore

Do Ahead: The pomme puree can be made up to 2 hours in advance. Transfer it to a heatproof bowl, cover the bowl with plastic wrap, and set it over a pot of barely simmering water (the bottom of the bowl shouldn't be touching the water). By storing the potatoes this way, they will retain their lovely texture without turning gluey. Tips: