This cornbread stuffing recipe will revolutionize your holiday (or everyday!) table, and I promise you that nobody will have a clue that it’s gluten free (although you can make it with regular all-purpose flour if you're not GF). It’s rich and savory with onion, celery, sage and thyme, and it has an irresistible sweetness from cornbread. [Don't miss the step-by-step VIDEO below!]

This is the best gluten free cornbread stuffing. I know that’s a bold statement, but after trying dozens of gluten free stuffing recipes over the past decade, this is hands-down my family’s favorite. It’s sweet and savory, with a crunchy top and moist center. It's technically a cornbread dressing, since it’s cooked in a baking dish (see the FAQs below). While you can use it as a stuffing inside of a turkey or chicken, I prefer to bake it on its own, which allows the top to turn deliciously crispy.

How to make this cornbread stuffing recipe:

To be perfectly honest, I could happily eat this cornbread stuffing straight out of the baking dish and call it a day, but it’s also fantastic alongside roasted turkey, chicken and pork, or with roasted vegetables. Try it in acorn squash as a beautiful vegetarian meal (roast the squash until tender, then add the stuffing and cook until browned and crispy on top). For the ultimate breakfast, serve the stuffing with fried eggs and sausage or greens.

Can you make cornbread stuffing ahead?

Yes! You can make this cornbread stuffing recipe the day before then simple reheat it in a warm oven before serving, making it perfect for entertaining.

What is the difference between cornbread dressing and stuffing?

Should you dry out cornbread for stuffing?

While most recipes require that you dry out cornbread in the oven or at room temperature overnight for stuffing, it’s not needed for this recipe! The stuffing turns crispy on top with a moist and tender center.

Should you put eggs in stuffing?

Eggs bind stuffing together, making it easier to scoop and stuff. For this recipe, you only need one egg to bind everything together.

What is gluten free stuffing made of?

Tips for this recipe:

Other Thanksgiving recipes to try: 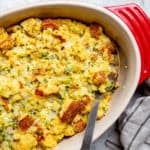 This gluten free cornbread stuffing recipe will revolutionize your holiday (or everyday!) table. It’s rich and savory with onion, celery, sage and thyme, with irresistible sweetness from cornbread. It’s technically a cornbread dressing since it’s baked in its own dish, giving it a delicious crispy top, but you could stuff it inside a turkey or chicken (or roasted squash—see the tips below) if you prefer. You’ll need to start by making a batch of this Easy Skillet Cornbread (which can be made with gluten-free flour or regular flour). You can make the cornbread the day before (cover it and let it sit at room temperature), or you can make it months ahead and freeze it! For a vegetarian stuffing, use vegetable broth instead of chicken broth.
Prep Time30 mins
Cook Time50 mins
Total Time1 hr 20 mins
Course: Side Dish
Cuisine: American
Keyword: cornbread dressing recipe, cornbread stuffing recipe, gluten free stuffing recipe
Servings: 6 -8 people
Author: Nicki Sizemore

Do Ahead: The cornbread stuffing can be baked 1 day ahead. Reheat in a warm oven before serving. Tips: