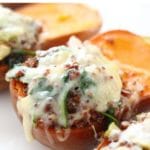 These quinoa, apple and spinach stuffed honeynut squash are topped with a melted layer of cheese and are completely irresistible. They're a stunning vegetarian side dish or a delicious main course. Don't miss the step-by-step video below!

Honeynut squash first appeared at our market a few years ago, and I've been smitten ever since. In this recipe, they're roasted until tender, then are stuffed with a cinnamon-spiked quinoa, apple and spinach stuffing. A layer of oozy melted cheese takes them over the top.The stuffed honeynut squash make for a gorgeous vegetarian side dish (or main course) on a holiday table, but are easy enough for any average Wednesday.

What is honeynut squash?

A honeynut squash looks like a minuscule butternut, but it has a richer, sweeter flesh. It's absolutely delicious and is worth seeking out, but if you can't find it you can use acorn squash in this recipe instead.

The quinoa filling was loosely inspired by my favorite stuffing recipe, which features onions, celery, apples, rosemary and thyme as the base. I also added a pinch of cinnamon to provide sweetness and warmth, as well as spinach, quinoa and pecans for substance. The stuffing gets piled into the squash cavities, and is then sprinkled with nutty Comté cheese (or you could use Gruyere). After a brief stint in a hot oven, they emerge with a golden, melted cap.

Can you use other squash varieties in this recipe?

Yes! You can swap out the honeynuts for acorn squashes. Since acorn squash isn't as sweet or rich as honeynut, I suggest adding a touch of butter and maple syrup to each squash half before stuffing.

For a vegan version, swap out the butter for olive oil (or vegan butter) and use a vegan cheese.

Can you make the stuffed squash ahead?

Yes! The stuffed squash (without the cheese) can be refrigerated overnight. Before serving, sprinkle the squash with the cheese and bake until warmed through.

For another variation, try this Moroccan Lamb Stuffed Honeynut Squash Recipe (see below)!

Tips for making this recipe: 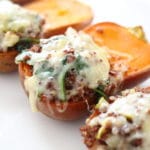 These vegetarian bombshells are a delicious main course or a stunning side dish! Honeynut squash halves are stuffed with a fragrant filling of quinoa, celery, apples, rosemary, thyme, spinach and pecans, and are capped with melted nutty Comté cheese. It’s the perfect dish for fall and winter and is a beautiful addition to the holiday table. Honeynut squashes look like mini butternuts but have a sweeter, richer flesh. If you can’t find them, you can use acorn squashes instead (if that’s the case, I like to add a touch of butter and maple syrup as noted in the recipe below, as the flesh isn’t quite as sweet as honeynuts). You’ll need cooked quinoa for this recipe (see note below), which can be made ahead. *For a vegan version, swap out the butter for olive oil and use a vegan cheese.
Prep Time20 mins
Cook Time35 mins
Total Time55 mins
Course: Side Dish
Cuisine: American
Keyword: healthy honeynut squash recipe, honeynut squash recipe, stuffed honeynut squash
Servings: 4 -6 people
Author: Nicki Sizemore