These pork tenderloin medallions with apples and onions are served in an insanely delicious apple cider pan sauce. It’s the ultimate one-pan dinner, and you’re not going to believe how easy it is to make! You can stop there for a cozy weeknight meal, or you can take it over-the-top for a special occasion feast, and I’ll show you how.

Pork and apples is one of the first things I crave once the weather starts to cool, and this recipe is my favorite, incorporating both cooked apples and apple cider (and raw grated apples if you serve this zippy Apple Slaw alongside, but more on that in a minute). The juicy, tender pork with the cooked apples and creamy apple cider sauce is heaven.

How to make pork medallions:

Cutting the tenderloin into medallions

How to serve the pork medallions

You can serve the pork medallions and apples on their own or with steamed rice for a simple weeknight supper, but I love to pile them over these Creamy Grits or Whipped Potatoes. To take the meal over the top, spoon this zippy Apple Slaw over the pork for brightness and crunch. The combination of the creamy grits or potatoes with the savory pork, sweet sauce and lemony slaw is sublime. It’s a meal that’s just as fitting on a weeknight table as it is for the holidays.

What cut of meat is a pork medallion?

A pork medallion is most often cut from a pork tenderloin.

Are pork medallions the same as pork tenderloin?

Pork medallions are round or oval shaped cuts of meat from a pork tenderloin. To make medallions, cut a tenderloin crosswise into 1 to 1 ½-inch rounds. Flatten the rounds slightly so that they're all the same thickness (this will ensure that they cook at the same rate).

Should the pork tenderloin be cooked covered or uncovered?

Pork tenderloin medallions should be cooked uncovered, which will allow them to sear and caramelize rather than steam.

Why are my pork medallions tough?

If your pork medallions are tough it's likely because they're overcooked. Be sure your skillet is hot before searing, and don't over-crowd the pan. This will allow the medallions to brown quickly without drying out.

How do you know when pork medallions are cooked?

The pork medallions should be rosy pink (not red) in the center, and the internal temperature taken with an instant read thermometer should read 145˚F.

What apples are best for cooking with pork?

Sweet-tart apples pair wonderfully with the savory flavors of pork and won’t fall apart when cooking. Fuji, Honeycrisp and Pink Lady apples are all good choices.

Can you swap out creme fraiche for sour cream?

Yes! You can swap out the creme fraiche for full-fat sour cream (be sure to use full-fat, not low-fat, which could break in the sauce).

Refrigerate any leftover pork medallions in the sauce for up to 4 days. Reheat in the microwave or on the stovetop until warmed through.

Tips for this recipe: 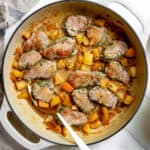 This is comfort food at its best. Rosemary and thyme-rubbed pork tenderloin medallions are served in an insanely delicious apple cider sauce that’s thickened just slightly with a bit of crème fraiche. You can stop there for an amazing one-pan dinner, but I love to brighten things up with a zippy Apple Slaw. To take the meal over the top, serve the pork over this Creamy Polenta or these Whipped Potatoes and pile the slaw on top. If you’re making the whole meal, start the polenta or mashed potatoes first, then make the pork and slaw.
Prep Time15 mins
Cook Time30 mins
Total Time45 mins
Course: Main Course
Cuisine: American
Keyword: pork medallions, pork tenderloin apple, pork tenderloin medallions
Servings: 4 people
Author: Nicki Sizemore

Cook the onions and apples

Make the pan sauce and finish

Do Ahead: The pan with the pork, apples and sauce can sit, covered (off the heat), for up to 30 minutes. Reheat gently before serving. Tips: